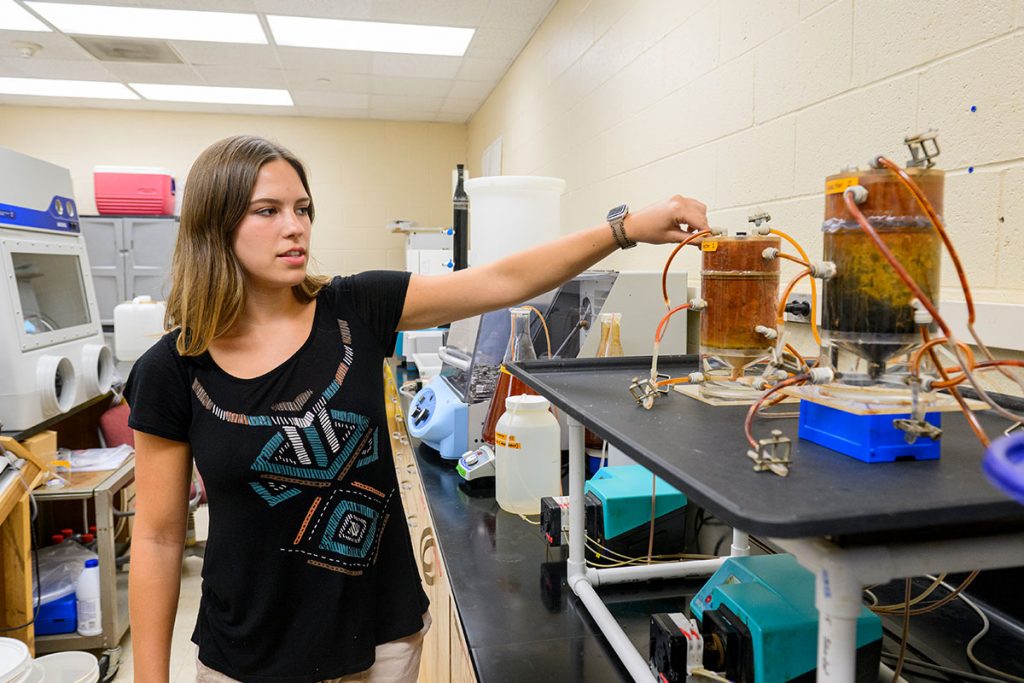 Orner’s team of environmental engineers at the Benjamin M. Statler College of Engineering and Mineral Resources will assess the performance of wastewater lagoons: low-energy treatment facilities where wastewater sits in ponds and is treated through largely natural processes before it’s released into natural waterways. While WVU looks at West Virginia’s lagoons, partner universities will investigate lagoons in California’s hotter and drier conditions.

The EPA’s million-dollar question, “What’s in our water?,” reflects the fact that while plenty of wastewater data is available from large, high-tech treatment plants, relatively little exists about water released by rural, low-tech lagoons – especially regarding nutrients remaining in wastewater after treatment.

Algal blooms like Florida’s red tide can directly harm humans. So can high concentrations of nutrients themselves.

“If you have a well and you’re drinking water with too much nitrate,” Orner said, “that can cause blue baby syndrome, which has symptoms such as blueness of the skin due to lack of oxygen in the blood, headaches and difficulty breathing.

“The United States has a growing population, and we all urinate and defecate. Population growth means more nutrients being discharged. If we find a lot of nitrogen and phosphorus in water, that may mean a lot of feces are still in the water, which may mean a lot of pathogens.”

While the repercussions of inadequately treated wastewater are complex, Orner said lagoons are “very simple. They’re just engineered bodies of water,” composed of one or more pools or basins called “cells.”

Because lagoons have a large footprint, they typically serve smaller communities where land is abundant but municipal funding can be scarce. Orner is currently aware of 26 lagoons statewide.

“One of our first jobs is calling utilities providers and getting accurate numbers on how many are out there and what performance data they have,” he said. “For small communities, it might be one person in charge of wastewater treatment, maybe someone with a second job who’s just making sure nothing’s way out of control. They may rarely take nutrient samples or might not be required to do so, so water quality data for lagoons can be scarce.

“Apart from the cost of real estate, lagoons are one of the more economical systems. For places with smaller budgets, they’re not too expensive to install or maintain – but we have to learn how effective they are. And if they’re not performing well, is there anything we can do? What’s the sweet spot of removing nutrients while limiting environmental impacts at a reasonable cost?”

Then, Orner said, they’ll create “a user manual for how to model lagoon performance under different conditions and with different technologies, using BioWin, a software that’s commonly used to model larger-scale, urban wastewater treatment plants but doesn’t yet have a module for lagoons.”

Orner’s team will also quantify the environmental and economic costs and benefits of implementing a new technology or feature into an existing lagoon.

Wadsworth Professor Lian-Shin Lin will oversee a specific component of the research focusing on development of a novel technology: iron-based biofilters for removing nutrients.

“Motivated by the abundance of iron in our region, we’ve studied various reactions of iron for beneficial applications,” Lin said. “Our ongoing research at WVU has shown the feasibility and cost-effectiveness of iron-based anaerobic biofiltration for removing organics and nitrogen while generating the fertilizer by-product vivianite.”

Vivianite is one example of Lin and Orner’s shared interest in finding financial opportunity in wastewater treatment.

“We’re discovering that we are able to recover the nutrients from wastewater, not just release nitrogen into the air,” Orner said. “We can take nitrogen and phosphorus and make a fertilizer.

“Let’s say previously we were buying and shipping nitrogen-based fertilizer from across the world, and now we’re able to take nitrogen and phosphorus from nearby wastewater and produce a fertilizer locally. We’re having this double benefit in improving environmental quality but also locally obtaining a resource that has value.

“With the life-cycle element of this research, not only are we trying to figure out how well these lagoons or technologies work to remove nutrients, we’re also going to see their environmental and economic impacts over time.”