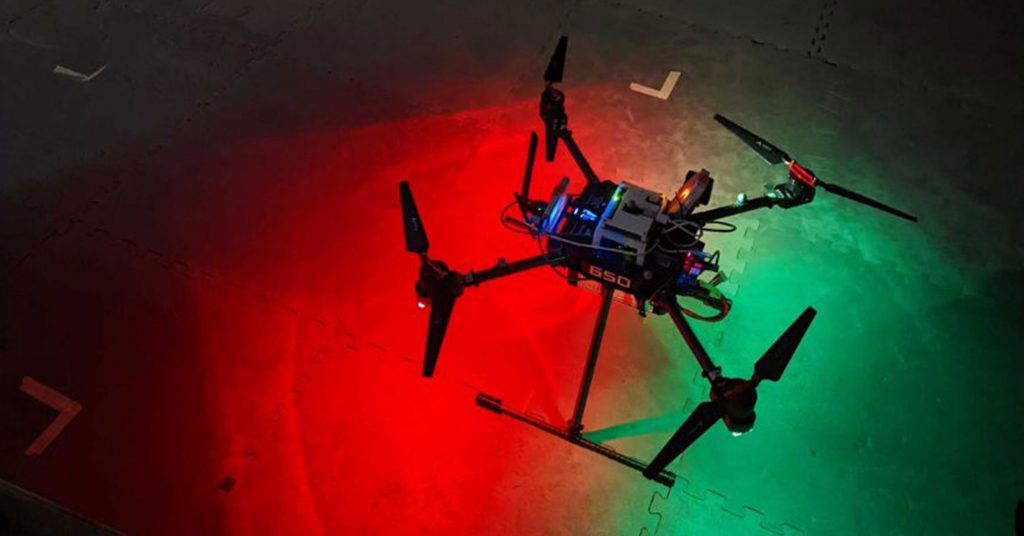 Above: Research at West Virginia University combined with Kinnami’s platform will be used within a network of drones and in Android Team Awareness Kit (ATAK) devices to form a single network that communicates as one to help U.S. Air Force search and rescue missions. (Submitted photo)

A member of the United States military is separated from their group, leaving them lost in an unsafe battlespace. To stay hidden from enemies, they use a smart handheld device that connects to a team of drones that locates missing personnel without using GPS signals – allowing them to be quickly and safely located.

This is the reality West Virginia University engineers are making possible for combat search and rescue operations to pinpoint isolated personnel without using radio GPS that an enemy can easily intercept.

Through a 21-month, $300,000 project with funding from the Small Business Innovation Research of the U.S. Air Force Laboratory and in partnership with Kinnami Software Corporation, Guilherme Pereira, associate professor in the Department of Mechanical and Aerospace Engineering at the Benjamin M. Statler College of Engineering and Mineral Resources, is working to change the way search and rescue tasks are executed in hostile territories.

“In some environments, such as underground, in buildings, forests or in warfare, GPS signals are not available, only partially available, or jammed, preventing drones from self-localizing using GPS,” Pereira said. “Therefore, drones need to rely on other sensors, such as accelerometers and cameras, to estimate their position. In a cooperative team of robots, they can also use information from other robots in the team to help with their localization.”

Kinnami’s platform can work in degraded communications environments and provides a secure means to share sensitive data in a timely way, such as location or biometrics, which will allow a rescue team to monitor the lost person and their health during the rescue mission. Kinnami’s platform, AmiShare, will enable secure peer-to-peer data sharing about the person being rescued in real-time and will support mission operations more effectively.

By using a network of drones and rescuers carrying Android Tactical Assault Kits (ATAKs), search and rescue teams can have data shared directly with them in order to locate the missing individuals. ATAK is an Android smartphone geospatial infrastructure and military situation awareness app that allows precision targeting, surrounding land formation intelligence, navigation and data sharing.

“Rescue teams will receive health information from the lost person. This information can be used to plan the rescue mission and help prioritize personnel rescue in cases where several people are being rescued,” Pereira said. “ATAKs will also give the search and rescue team the ability to control the drones, pointing them to regions with a higher probability of finding lost personal or simply moving them away from other rescue vehicles.”

WVU’s research and Kinnami’s platform will be used with the network of drones and in the ATAK devices to form a single network that communicates as one — sharing data between rescue team members in the air, on the ground, command and control personnel.

In this research, Pereira and co-principal investigator Jason Gross, interim chair and associate professor of mechanical and aerospace engineering, will assume the drones will use radio signals to estimate the relative distance between them. Then, in a network of several drones, once one robot knows its localization, the information can be combined with the range to estimate the localization of the entire team.

“Using the same principles of the robots, we will be able to also localize people without using GPS signals,” Pereira said. “This will be important in search and rescue missions, where the missing person may also be carrying an ATAK.”

Once the lost person’s device is connected to the network, the rescue personnel will have an estimate of their position, thus allowing a fast rescue.

Engineers will use a new indoor robotics testing facility that is currently under construction in the Statler College.

“This project leverages our existing research in this area from another project with Kinnami and extends it to include human operators and ground beacons which add new dimensions of research questions,” Gross said. “We seek to integrate several technologies: network data security, cooperative localization and control across a network of humans and robots. Each of these technologies are needed for search and rescue operations in contested environments so, in this project, it is important to think through the implications and limitations by trying to integrate them.”

“Our software, in combination with WVU’s positioning and navigation algorithms for drones, will provide new capabilities to the 563rd Rescue Group, our Air Force customer, for locating isolated personnel in network degraded and GPS denied environments,” said Krishnan. “We’re excited to partner with WVU to support faster safer smarter rescue missions for the Air Force and for other first responders where up-to-date situational awareness is key to response and action.”

“The future of the U.S. Air Force is through innovation and forward-thinking technology, and we’re excited to be working with Kinnami and West Virginia University on the next stage of this project,” U.S. Air Force Major Joshua Stanley with the 563rd Rescue Group said. “Having the ability for rescue teams to and communicate in real-time with each other and more efficiently locate isolated personnel, in contested and degraded environments, provides operational and strategic advantages for Air Force personnel recovery operations.”