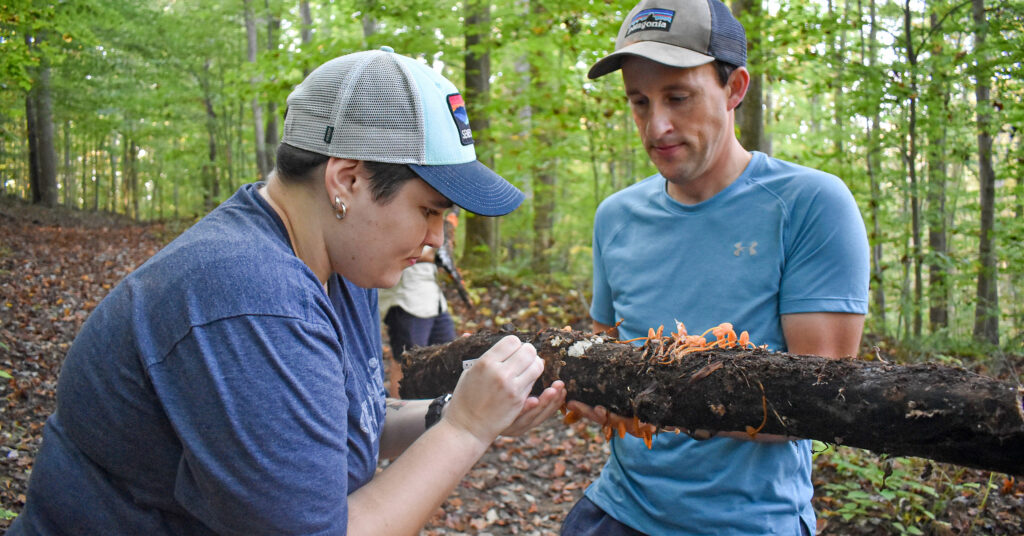 Sometimes discoveries are hidden in plain sight. Or under a decomposing log, as in the case of one West Virginia University forest pathologist and mycologist.

Upon the WVU Animal Science Farm woodlot off West Run Road, Matt Kasson has taken note of the presence of a squirmy, whitish fungus-feeding millipede that hasn’t been officially documented in the greater Morgantown area since the 1970s.

Kasson first spotted the millipede species, Petaserpes cryptocephalus, after turning over a log during a walk in the woods with his 5-year-old son.

“I was shocked to see it there,” said Kasson, associate professor in the Davis College of Agriculture, Natural Resources and Design. “They’re harder to find than other millipedes. We knew it was in region as we had recently discovered in Ohiopyle State Park just north of here in Pennsylvania but the last documented case in Monongalia County was 50 years ago.”

Since his initial discovery, Kasson and his team have uncovered more of the tiny, leggy critters on the farm woodlot. Kasson said the species differ from others because they’re smaller and typically do not aggregate like other fungus-feeding millipedes.

The research is part of a National Geographic-funded project to study the fungal diversity associated with fungus-feeding millipedes, some of the earliest known, yet understudied, terrestrial animals.

Several years ago, Kasson and Angie Macias, a doctoral student in plant and soil sciences, set out to better understand the association between millipedes and fungi, its life-sustaining food.

Kasson noted that millipedes serve a vital role in ecosystems. Most of them eat decomposing plant material while others – like the Petaserpes cryptocephalus – feed exclusively on fungi.

“One could argue whether or not a fungus-feeding millipede is important,” Kasson said. “But they are because they help influence the fungal community members in a forest. We know that fungi are critical for breaking down woody material. So if millipedes are influencing those communities, it could affect the rate at which woody biomass is degraded and affect carbon cycling and soil building.”

Macias added that the Petaserpes cryptocephalus exhibits a rare diet among animals, as most creatures that eat fungi also eat other things, like soil, rotting wood and decaying leaves.

“Feeding on fungi can help stimulate the growth of the fungus, much like how pruning a plant can help them branch and grow more,” she said. “This may help accelerate the rate of decay for wood in forest ecosystems, like we have here in Mon County. These millipedes may also help spread fungi to newly fallen logs, as they can carry spores on their bodies and leave them behind in feces.”

The discovery of the Petaserpes cryptocephalus on WVU property adds a personal tie-in to their research project. Kasson noted he and his students have several other research projects happening on this same property and have walked the trails dozens of time without ever noticing the millipedes.

Macias said there have been only six confirmed sightings of the species in West Virginia: Three in Pocahontas County between 1963 and 1972, one in Mercer County in 1971, one in Monongalia County in 1972, and one in Nicholas County (date unknown).

Finding a species on a University-owned farm also shows the value of research farms, Kasson said.

The team will soon travel to Arizona and California as part of the project to seek out more millipedes.

“The hot spots (for millipedes) are in Appalachia and California,” Kasson said.

Earlier this year, the team collected millipedes from southern West Virginia, Virginia, South Carolina, Georgia, Alabama and Florida. Their travels in Florida took them as far south as Key West, where they recovered a tiny non-native fungus-feeding millipede from landscape mulch in botanical gardens and mulch piles.

The goal of the project is to describe and document, for the first time, the complete fungal communities of up to 25 fungus-feeding millipede species.

It’s currently estimated that only 5% of the estimated 2.2 million species of fungi have been formally described.

“We haven’t been able to find out much about the fungi associated with these animals yet,” Macias said, “as we must collect all the samples before we can start, but I expect we’ll find that many amazing fungi are part of their diet, including species that scientists have yet to name.”