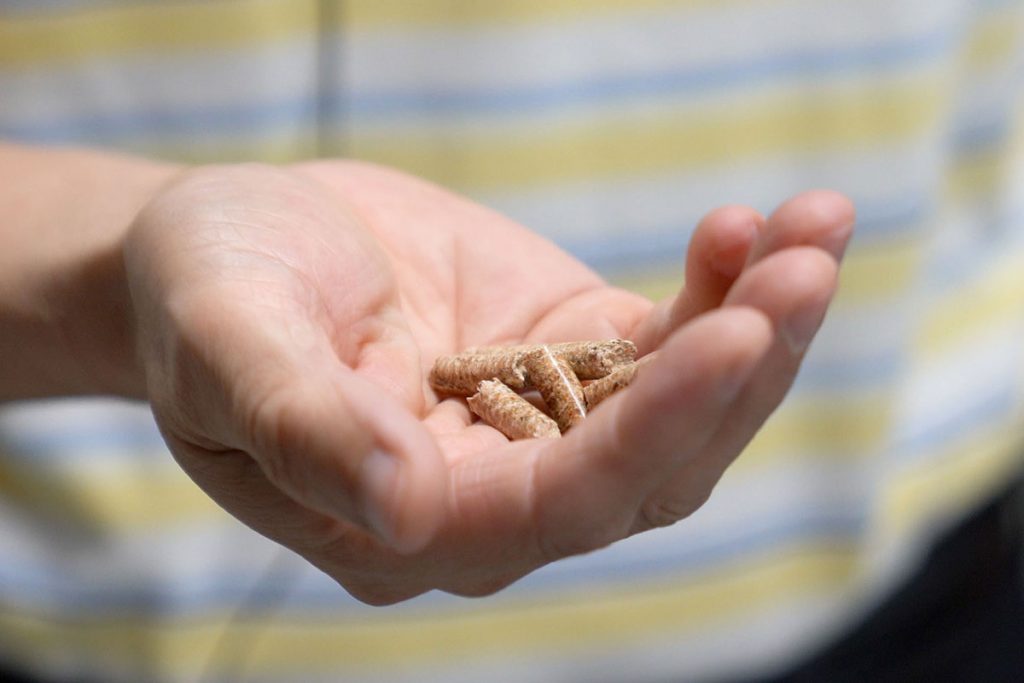 Above: To recreate military burn pit conditions, researchers are using pellets developed in the WVU School of Forestry to mimic the composition of burn pit materials at U.S. bases in Iraq. (WVU Photo)

Military burn pits are not campfires.

Nurkiewicz, chair of the Department of Physiology and Pharmacology, is studying how inhaling emissions from these burning and smoldering materials could lead to serious health problems in military veterans. He and his team are using a special stove in WVU’s Inhalation Facility to safely re-create the conditions of burn pit exposure and study their health effects.

The project is a collaboration with the National Guard, Minneapolis Veterans Affairs and Northwestern University.

“In camping, what you pack in, you pack out, right?” Nurkiewicz said. “Well, the military has to prevent the enemy from benefiting from their presence. So, they destroy everything they have. In concept, the logic is obvious, but in practice, it’s a horrible thing because you’re throwing in everything from standard garbage — paper, plastic, fabric, food — to paint, oil, batteries, computers, unspent ordnance and jet fuel. And I haven’t even mentioned the medical waste as well as standard human waste.”

At the Inhalation Facility, which Nurkiewicz directs, he and his team are using a customized stove that they modified to burn pellets that incorporate the most common materials that go into burn pits.

The pellets’ composition is based on samples of “sand and ash collected from some of the busiest bases in Iraq,” he said.

The WVU School of Forestry in the Davis College of Agriculture, Natural Resources and Design is making the pellets out of materials that dominated the samples, including paper, rubber, plastic and nylon.

After Nurkiewicz and his team feed the pellets into the stove, they’ll use jet fuel to ignite them. That’s an important detail because soldiers used jet fuel as the main accelerant for burn pits.

As the pellets burn, the researchers will capture the emissions they release and analyze the toxicants they contain in real time.

They’ll also pump some of the emissions into an exposure chamber where experimental animals are present.

After the animals have been exposed to the emissions for different lengths of time, researchers will observe how their physiology and behavior change.

They’ll also sample the animals’ blood to identify potential biomarkers that could serve as early signs of disease.

Later, they’ll work with Minneapolis Veterans Affairs Health Care System to run similar blood tests in a large cohort of veterans diagnosed with chronic multisymptom illness. Once known as “Gulf War Syndrome,” CMI has emerged in veterans of the 1991 Gulf War and been linked to the inhalation of burn pit emissions.

Where the biomarkers converge could point toward a future blood test for CMI, which is tricky to diagnose because of its wide-ranging symptoms: pain, pulmonary and cardiovascular disease, behavioral changes, diminished energy and impaired immune function.

“This is not just cardiovascular disease,” Nurkiewicz said. “This is toxicity due to a unique exposure that no other people have experienced. Combined with the stresses associated with deployment, the potential for adverse health outcomes is high. If you were deployed in the Middle East, you were probably exposed to the emissions from a burn pit. And if you jump forward, now you have veterans who are ending their deployments, and they’re coming back in large numbers and presenting with some very serious health issues.”

It hasn’t always been easy for veterans with CMI to get the help they need for their “very serious health issues.”

For instance, a new bill to expand health care benefits for veterans harmed by burn pits — H.R. 3967 known as the Honoring our Promise to Address Comprehensive Toxics Act — recently became law. But it did so only after a long, public fight between legislators and veterans’ advocates.

Nurkiewicz’s project — which received support from the West Virginia Clinical and Translational Science Institute and the WVU Health Sciences Center’s Office of Research and Graduate Education — may increase the likelihood that veterans suffering from CMI will get the treatments and services they need.

“Even the most naive politician isn’t going to advocate for the allocation of resources because of the challenges in diagnosing CMI,” Nurkiewicz said. “They’ll see it as a waste of money. So, that’s the greater goal of our research: to provide a more exact diagnosis that is irrefutable from a clinical perspective.”

Editor’s note: The use of animals in this project was evaluated by WVU’s institutional animal care and use ethics committee. WVU is voluntarily accredited by AAALAC, a national peer organization that establishes a global benchmark for animal well-being in science.