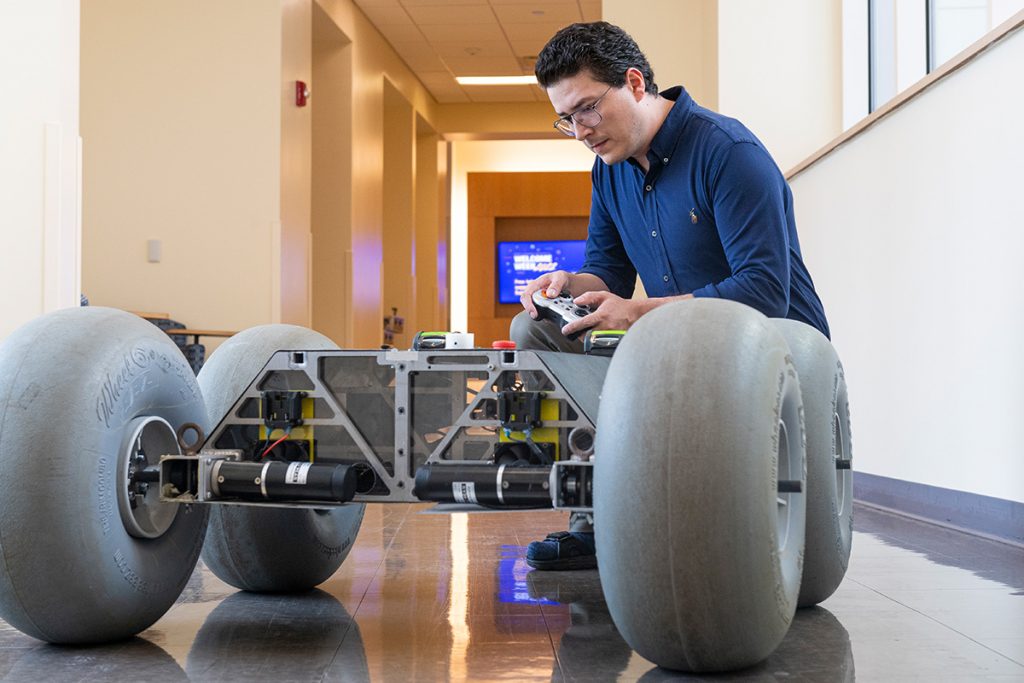 Above: Cagri Kilic, postdoctoral research fellow in the WVU Statler College of Engineering and Mineral Resources, shows off a rover that he developed to research slips in planetary rovers. Two other researchers are applying this same technology to improve safety in retail and wholesale settings. (WVU Photo/Matt Sunday)

For as long as robots have existed, the fear of machines ousting humans for their jobs has persisted.

But for this research project, West Virginia University engineers are deploying robots to help workers keep their jobs — by saving them from potential slips, falls and workplace hazards.

Yu Gu and Jason Gross, associate professors in the Department of Mechanical and Aerospace Engineering, have received $367,000 from the National Science Foundation to study ways of reducing falling risk in retail environments.

To do this, Gu and Gross will use robots to scope out and detect risks along floor surfaces of wholesale and retail spaces.

“There is a significant problem with slip and fall in retail spaces,” said Gross, also interim chairperson of mechanical and aerospace engineering. “So, we’re trying to figure out a way to use robots to provide situational awareness, monitor risks and provide walkability maps.”

Students working with Gu and Gross are preparing a robot “testbed” to mimic a retail environment where the team can develop and hone their approach in how machines analyze potential hazards.

One way is by equipping robots with cameras, Gu said.

“Some might say, ‘Why not use the security cameras already in the stores to detect slip and fall risk?’” Gu said. “The limitation is in appearance, which can be deceiving. It’s better to not only equip a robot with a camera but to drive it on the surface to see how slippery it is. The wheels of the robot are a better estimate of slip risk.”

Gu and Gross outlined three objectives to this research, done in collaboration with the University of Florida. The first is to identify and evaluate holistic risks associated with the operation of robots in those working environments.

The second is to develop a new function that could augment a wide range of robots to survey the indoor ground surface while performing primary functions, such as serving as a shopping guide. Data will generate real-time indoor space walkability maps informing pedestrians of potential risks.

Lastly, the research team will investigate the effects of the robots and walkability maps on workers’ physical falling risk exposure, cognitive workload and psychological impacts on these sites.

Gu said this study builds off of existing research conducted by Cagri Kilic, a postdoctoral research fellow at the Statler College of Engineering and Mineral Resources in the WVU Navigation Lab. Kilic led research on estimating slips in planetary rovers. He developed a way for extraplanetary rovers to use nonvisual information to maneuver over treacherous terrain.

“Because of that research, we can easily estimate the slip based on wheel-and-terrain interaction,” Gu said. “We can strategically turn the wheels in certain ways to better estimate slip while we drive.”

“We have this ability, as the robot drives, to monitor the onboard sensors and compare the wheel speed versus the actual speed of the robot,” Gross said. “We can infer slip, and can deploy a slip meter occasionally to calibrate that.”

The team also plans to test the robots after hours in an actual retail space.

“We’ve done this with a robot traversing a certain, single area,” Gross said, “but branching out to combine that with the camera data is one of the exciting research aspects of the project.”