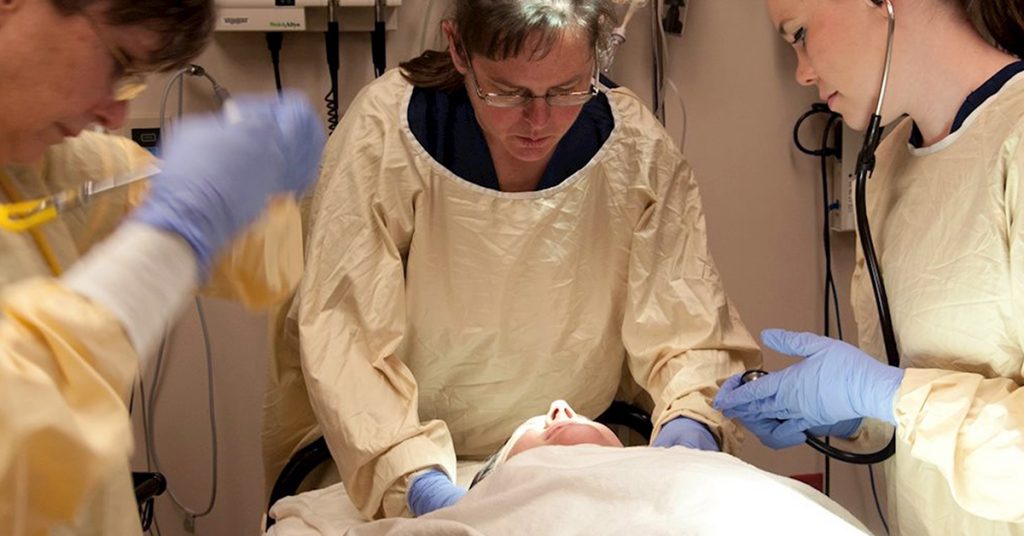 Above: Dr. Alison Wilson (center) is a trauma and general surgeon and serves as chair and executive director of the WVU Critical Care and Trauma Institute and professor in the WVU School of Medicine. She leads a highly skilled team of board-certified surgeons and critical care physicians who provide advanced, leading-edge care for thousands of patients every year. The WVU Critical Care and Trauma Institute is the region’s only nationally certified Level 1 adult and Level 2 pediatric trauma center.

As healthcare professionals in Ukraine are increasingly overwhelmed by dire circumstances amid war, some are relying on training from experts at West Virginia University.

Nearly a decade ago, a group of six trauma surgeons from Ukraine visited the WVU Medicine Jon Michael Moore Trauma Center as part of a collaboration with the American College of Surgeons and the World Federation of Ukrainian Medical Associations in the United States. The historic visit in October 2013 was the first unified educational opportunity including surgeons from Eastern and Western Ukraine.

“I found them to be very warm and giving, very proud of their traditions and their culture, and very much involved in their communities and very proud of the medical care they provide to the people in their areas,” Dr. Alison Wilson said of her interactions with the group. “All six physicians were highly skilled, senior surgeons who came to participate in these courses as a ‘train the trainer’ session. The idea was that they would return to Ukraine and be the initial instructors as the cases were promulgated in Ukraine.”

Wilson is a trauma and general surgeon and serves as chair and executive director of the WVU Critical Care and Trauma Institute and professor in the WVU School of Medicine.

Recognizing strains on the Ukrainian healthcare system and the threat posed by external forces at the time, arrangements were made for the surgeons to receive Advanced Trauma Life Support and Rural Trauma Team Development Course training led by Wilson.

“Though we’re seeing a large-scale invasion of Ukraine now, there have been combat operations in Eastern Ukraine over the last eight years,” Wilson explained. “These programs have been utilized to educate people that were already serving in relative combat zones in Eastern Ukraine.”

Developed by the American College of Surgeons Committee on Trauma, the Advanced Trauma Life Support program and Rural Trauma Team Development Course provide an organized approach for healthcare providers who assess and initially manage the care of an injured patient.

The Advanced Trauma Life Support program’s single systematic, concise method ensures the program is applicable across various settings by providing knowledge and techniques that are comprehensive and easily adapted. Its standards allow the provider who first attends to the injured patient, and who has the greatest opportunity to impact the patient’s outcome, to assure that optimum care is provided and that the level of care does not deteriorate at any point during the evaluation, resuscitation or transfer process.

Emphasizing a team approach, the Rural Trauma Team Development Course improves the quality of care by addressing common problems in the initial assessment and stabilization of trauma patients when access to care is impaired by time, distance and geography. The systemic response assists three-member teams at rural facilities in determining the need to transfer the patient to a higher level of care.

“We have heard from all those surgeons that they have certainly taken those principles back to their home institution, as well as the critical access sites, and they feel as though it’s really helped them prepare for caring for their people day to day,” Wilson said. “Right now, everything is very overwhelmed. So, did it completely meet the needs? No. Do we think it’s helped improve the assessment of trauma care in Ukraine? Yes.”

“Unfortunately, one of the known tactics is to target hospitals and areas where civilians are, and we’ve heard that from our colleagues,” Wilson said. “They’re seeing more and more casualties at the larger urban centers. The other big challenge is the volume of pediatric injuries – far more than what they’ve ever seen in the past.”

Wilson and her colleagues have been advocating for the establishment of the Advanced Trauma Life Support program in Ukraine and supporting the translation initiative for the Rural Trauma Team Development Course, and now are supporting the group with medical supplies and online consultations as they combat the casualties of war.

“They’re in desperate need of medical supplies – surgical supplies, wound dressings, all pediatric supplies,” Wilson said. “We’ve been collecting everything from unused parts of disposable kits, unused things that have been open, and normally we couldn’t recirculate, or things we would automatically throw away. The hospital and the units have been great about pulling together.

“We will continue to work with folks as long as we’re able to get things to them. We’re working with a couple of Ukrainian-based medical groups out of Cleveland and Buffalo to ship directly to providers. At some point the supply line may be somewhat limited, but right now it’s a secure, reliable route.

To support their Ukrainian counterparts in real time, Ukrainian-American trauma professionals across the country are providing virtual consultations.

“Many of their trained trauma people are inundated or people just can’t get to them,” Wilson said. “For example, there was a non-surgeon in a resource-limited area who was trying to care for over a hundred trauma patients in one day. So, they’re trying to serve as that additional resource for advice on how to care for and stabilize those patients until they can get them to a higher level of care or get some kind of relief.

“What we are hearing on the news is a very small fraction of what they’re really dealing with. Because of some limited ability to confirm sources, people here are a bit sheltered from the degree of impact on the civilian population.”

For those living in Ukraine, the American College of Surgeons STOP THE BLEED program is being broadcast almost every day throughout the nation, many of these being taught virtually by Dr. Roxelona Horbowyj, who served as one of the instructors assisting with the WVU training program and has remained the contact with the Ukrainian surgeons since their visit. Taught to more than 1.5 million people worldwide, the program trains civilians to save lives through three quick actions to control significant bleeding.

Learn more about how WVU is helping international students from Ukraine or contribute to existing WVU student assistance funds through the WVU Foundation. Make sure to designate the gift to one of the funds mentioned and indicate in the comment section that the gift is for Ukrainian war student assistance.