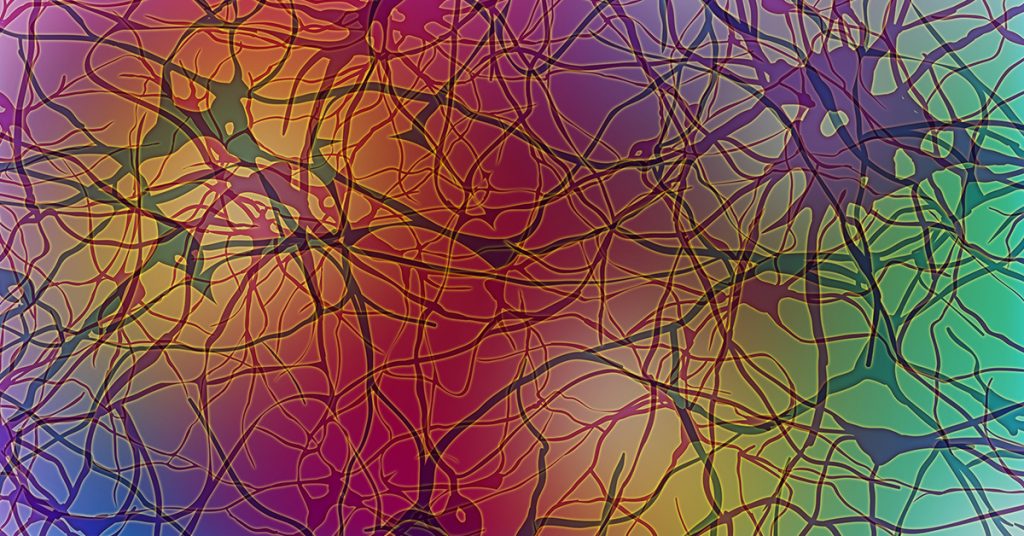 Above: Multiple sclerosis is a chronic disease that damages neurons. A WVU doctoral student, Kelly Monaghan, is researching the role that a protein, STAT5, plays in the development of MS. (WVU Illustration/Aira Burkhart)

A human immune system is a lot like the board game Mouse Trap: it’s a Rube Goldberg system of interacting parts. Only instead of a falling ball causing a tiny diver to leap into a tub—which, in turn, springs a trap on some plastic mice—proteins trigger other proteins to activate immune cells and direct them toward germs. But if those proteins mistakenly direct immune cells toward healthy tissue, autoimmune diseases like multiple sclerosis – which attacks neurons – can arise.

A new study led by Kelly Monaghan—a researcher with the West Virginia University School of Medicine—suggests that part of the “Rube Goldberg” immune system shows promise as a potential target for MS therapies.

“Anytime you have any kind of central nervous system issues, you have to go through a series of steps to have cells get into the brain or spinal cord,” said Monaghan, a doctoral candidate in the Department of Microbiology, Immunology and Cell Biology. “Gaining a better understanding of those immune mechanisms associated with MS can help to inform novel therapies.”

Her findings appeared in the Proceedings of the National Academy of Science.

Her study—funded by the National Institutes of Health—focused on STAT5, one of the many proteins circulating in the body that can metaphorically turn genes on or off.

“STAT5 is a transcription factor,” Monaghan said. “It is a member of the STAT protein family, and it has a lot of different roles in cell proliferation and inflammation. Importantly, STAT5 proteins must form dimers to regulate gene expression. The interaction of two dimers results in the formation of tetramers, which regulate an independent set of target genes.”

Monaghan and her colleagues wanted to know if STAT5 tetramers played a role in signaling white blood cells to interact and move through the meninges. If they did play such a role, the researchers wanted to learn more about it.

“The meninges, if you don’t know, are a series of three membranes that surround the central nervous system,” she said. “They act as a sort of checkpoint, if you will, to regulate the migration of cells into the actual brain or spinal cord.”

The infiltration of immune cells into the meninges is a hallmark of multiple sclerosis.

In particular, Monaghan wanted to investigate the molecular chain of events that might cause STAT5 tetramers to command another protein—called CCL17-to tell T cells, a type of white blood cell, to attack the central nervous system through “friendly fire.”

Monaghan and her team used two groups of mice to explore this topic. The first group had been genetically modified so that its STAT5 tetramer proteins could not rearrange themselves in ways that would trigger the problematic CCL17 response. The second group was genetically normal.

The researchers injected both groups of mice with myelin-reactive T cells to induce an experimental form of MS called experimental autoimmune encephalomyelitis, or EAE.

In response, the genetically-normal mice developed EAE in the conventional way, but the genetically modified mice didn’t. Interrupting their STAT5 tetramer “chain reaction” protected them against the disease.

“It wasn’t completely ablated, but it was significantly reduced in severity,” Monaghan said. “It was quite convincing that they developed less severe disease, suggesting that CCL17 is the pathogenic protein acting downstream of STAT5 tetramers.”

Not only did the genetically modified mice display milder and delayed paralysis, but a later examination of their spinal cords revealed healthier nerves that were better at transducing signals.

“MS is very complicated,” Monaghan said. “We found that the complex immune interactions between the cells is really what contributes to the difficulty in understanding this disease.”

Insights like the ones gleaned from this study can point to future treatments for MS, a condition that more than 2.3 million people have worldwide, according to the National Multiple Sclerosis Society.

“Patients diagnosed with MS suffer for a lifetime, and unfortunately, their clinical symptoms get worst when the disease progresses,” said Edwin Wan, Monaghan’s mentor and an assistant professor in the Department of Microbiology, Immunology and Cell Biology. “Current drugs for MS treatments are quite effective at reducing the rate of relapse but cannot stop disease progression. The bottleneck of developing more effective drugs is that we do not have a complete picture about how the disease is initiated and progresses.”

The study’s findings help to fill in that picture, bringing hypothetical MS treatments closer to reality.

Research reported in this publication was supported by National Institute of Allergy and Infectious Diseases of the National Institutes of Health under Award Number P20GM109098. The content is solely the responsibility of the authors and does not necessarily represent the official views of NIH.

Editor’s note: The use of animals in this project was evaluated by WVU’s institutional animal care and use ethics committee. West Virginia University is voluntarily accredited by AAALAC, a national peer organization that establishes a global benchmark for animal well-being in science.